I first met Lupita Nyong’O in London when we did press together for 12 Years A Slave in London last October (you can read all about that here).

She has since become the darling of 2014 awards season, not only because of her phenomenal performance in the film, but how she seems to scene-steal every red carpet event she walks upon!

Before I tell you about the make-up details, I must say that one of the most rewarding aspects of my job is spending time with a talented woman in the first glorious rays of recognition, and being fortunate enough to play a small part of how they are forever remembered at that special time, via the paparazzi’s lens.… Read more...

The Eyes Have It – Ilia Mascara

Mascara! How we love you! In any form; smudged morning eyes, perfect blinking doll, heavy goth, clumpy 60s, multi colored 80s, even streaked after a good laugh or cry. Where you go we follow, applauding with a chorus of wildly batting lashes.

So it didn’t surprise me really when I came across the gorgeous Ilia brand in Vancouver this year. The founder Sasha Plavsic has concentrated her ethical expertise on hero products of mascara, lip color and multi-sticks. I was struck by how her organic, ethical brand easily competes in a market where healthful ingredients are a slow second to performance and sales.… Read more...

Last October I had the pleasure of working with a very special newcomer- Lupita Nyong’O, who was in London for the press and screening of Steve McQueen‘s much anticipated ‘12 Years A Slave‘ starring Chiwetel Ejiofor.

I was thrilled when I got confirmed as I rarely get to make-up someone with Lupita’s skintone for the red carpet. The chance to be able to do something glamorous (rather than editorial which is usually more conceptual or ‘urban’) using my favourite new products was a fabulous opportunity.

I ensured that her skin was moisturised but not oily.… Read more...

Here’s a look I put together for a red carpet event last year. I wore a black 50s style vintage cocktail dress from The Gathering Goddess.

I wanted to accent the refined, understated glamour with something modern. Lips seemed the way to go. Red would have been predictable, and might have made the look austere. Pink was the answer – and not any shade – I wanted garish, electric and unnatural!

I wore my hair blow dried straight with a deep side part – it could just as easily been pulled back and sleek.… Read more...

Whether it’s Spring, Summer, Winter or Fall, our wardrobe and make up bag tends to be divided into 2 looks – daytime and nighttime. But on a recent ThandieKay shoot I realized there’s a whole other category, and that’s the WEEKEND look. It’s where night spills over into day, and sun and moon seem to smooch and invite each other over into their hoods. It’s the bridge, the pause, the highest point of the upward swing before momentum propels you forward again. And it’s all yours. Your weekend.… Read more... 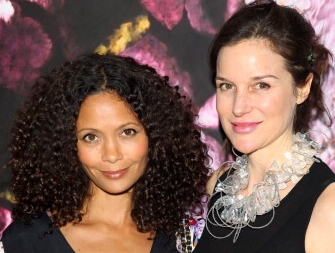 I’ve had the amazing good fortune of being a client of naturopath Elizabeth Peyton Jones for a number of years. Her holistic approach to wellness includes nutrition, kineseology and vast experience in the power of the mind-body connection.  Elizabeth is now focusing her energy on making her wisdom available for all – her first book ‘Eat Yourself Young’ will need to be wrestled from my cold, dead hands… although that’ll take an eternity because if I keep up with her programme I’m going to be sticking around for a long time!

Taking the old adage ‘Beauty Comes From Within’ as a starting point, can you give an overview of how nutrition is key to the healthy, youthful glow that we associate with beauty?

M-Up Video: Get Ready To Rock!

Of all the Red carpet looks we’ve done together, this is definitely one of Thandie & I’s favourites

The event was the Baftas in 2008 and Thandie wore a stunning asymmetric Alexander McQueen dress.

We love blush, and it’s especially complimentary when applying dark make-up as it adds an appearance of health and vitality to the complexion, lets you get away with a little edginess..

Here I used a sweet pink blush in Peony by Bobbi Brown .

painting a line with Chanel Stylo Effect Eyeshadow pen in Black Stream along roots of the upper eyelashes and smudge underneath the eyes around the outer corner, this gives the rock edge to the pretty flick.… Read more...

As our readers have probably noticed, we LOVE a good lipstick! and just when you think you’ve got your pink, red or nude ‘down’, along comes another gorgeous

lippy, in yet another formula. Bobbi Brown’s new Sheer Lip Colour in Hot Raspberry is great worn on it’s own (albeit with a little cover-up, mascara & soft blush) or with a black flick to give a modern twist to a classic make-up theme..

“The sheer lip look of the season-introducing a lightweight formula for lips that delivers an effortless wash of color plus nourishing shine” say’s the Bobbi Brown site.… Read more...

I came across Cipriana Quann via her site, urbanbushbabes.com and was struck by how similar the outlook of these 2 New Yorkers (with her online partner Nikisha) was to Thandie and I’s.

These two lovely ladies , one from Baltimore (Cipriana), the other from Toronto (Nikisha) are best described by themselves on their brilliant online portal so I won’t attempt trying to define them. After reading this, however, I’m sure you’ll find out what they represent and be a regular urban bush babe visitor-if you’re not already of course.

I didn’t say it out loud but it is what I was thinking and no, I wasn’t looking at my favorite actress in a movie or tv show, it was what I thought the first time I saw my Mother who had been natural all her life, a woman who sported one of the biggest afros I have ever seen in her all girl’s rock soul band, suddenly come home with a leisure curl (a more moderate version of a jheri curl).

I love every aspect of getting ready for a Premiere. It starts a couple of months before when I get a schedule of what appearances I’ll need to attend. The Premiere itself is usually at the end of a week long publicity push – so it’s just one of the looks I’ll need to figure out. A few years ago I decided to style myself for events – mainly because I have strong opinions and also because I enjoy how creative ‘styling’ can be. I don’t go to many Red Carpet Events so it’s manageable.… Read more...